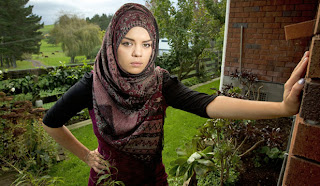 When Aiya Van Kooten stood face-to-face with a burglar in her bedroom, her left eye twitched, then she went into "predator mode".

"I screamed at him... jumped off my chair, leaped over my bed and sprinted after him down the stairs," she said.

The 20-year-old student was studying at her Dinsdale, Hamilton, home when two burglars entered through an unlocked door last Saturday at about 5.30pm.

"There were two of them; they were about 17-years-old. I said: you've robbed the wrong house."
Although she was the only one home, Van Kooten said she had no regard for her safety - instead, she said she was just overwhelmed with "rage".

"I just thought these guys are in my house, this is breaking the law... I'm gonna get you."

Van Kooten, who lives with her grandmother, said she chased the pair outside, where she managed to "boot one of them up the arse" before they clambered over her fence and into an adjacent paddock.
"They dropped the laptop and camera - I didn't realise they were carrying it."

Although she had a towel wrapped around her head, and no shoes on her feet, she didn't give up the chase.

After pushing though the back gate of the property, she chased the pair on to the road and then flagged down a passing SUV.

The driver decided to help and, with Ms Van Kooten inside the vehicle, pursued the offenders through the neighbourhood streets until the burglars ended up at Bremworth Park.

While Van Kooten, the driver and a member of the public - who she described as looking like an "ex-military man" - scoured the park for the pair, police arrived.

"All of sudden we saw the police car speed up and head down the street.

"We ran down there and the military guy had one of the robbers pinned down to the ground and the police came and got him."

Van Kooten was a victim of one of 78 burglaries in Hamilton between Anzac Day and 6am Monday morning.

Yesterday, she had a video conference with one of the offenders and several other burglary victims of the teen.

"He had a bad attitude at first, but he started to realise the impact of what he was doing."

Far from consigning the event to the past, Van Kooten asked whether the offender would be willing to see her again so she could help him with his rehabilitation.

He agreed, reluctantly, and she is set to visit him at a correctional facility in Rotorua in the next few months.