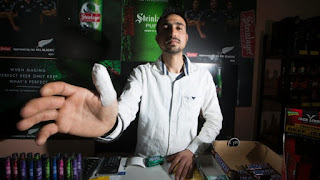 A liquor store worker risked his own life to protect his colleague from a masked man with a machete.

When a would-be robber threatened Arwinder Singh he grabbed the blade of the knife with his bare hands and held on. Blood was dripping down his arms.

"I knew if I held the machete and not let go, he can't touch me," Singh recalled on Christmas Eve. "I was injured but I will not leave the machete."

The offender, whose face was covered, walked into the store on Arapuni St in Putaruru shortly before 10pm on Wednesday night.

He put the blade on Singh's shoulder and demanded money from his colleague, Harsh Gupter, who was standing behind the till.

"He came in with a big machete, as big as my arm. He touched the machete on my shoulder and said to put the money in the bag, or he will cut me. Three times he pushed me onto the counter and scared me, but we were not giving money.

"When I got the opportunity, I suddenly grabbed the machete and would not let go of the machete."

Singh had a stand-off with the offender and refused to let go of the blade.

"He wanted to fight with me but I didn't let go because I didn't know what would happen next."

The offender then gave up and fled the store, leaving the weapon in Singh's hands.

"I had cuts on my thumb, hands, but he ran out of the store. We then called the police."

Police said the offender walked into the store with a machete and demanded money before one of the staff members intervened, grabbing the blade of the weapon.

That prompted the would-be robber to run-off. He was last seen running right onto Glenshea St.

Police are now appealing for witnesses.

The staff member was left with a minor injury to his hand and was treated by St John Ambulance staff.

The offender is believed to be in his teens or early 20s and is described as short and stocky, approximately 165 cms tall.

He was wearing a black jacket with no sleeves, black cap and white shoes.

Police want to hear from anyone who saw or heard anything suspicious.

Posted by Anthony at 4:40 PM No comments: 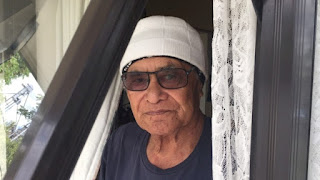 
A 79-year-old Hastings man has struck back against three teens trying to break into his house by hitting one of them across the head with a baseball bat.

Harvey Whaitiri was attacked in his council flat in the suburb of Camberley at about 9pm on Monday.

Whaitiri, who lives alone, was watching television when he heard a knock at his ranchslider door. He pulled back curtains of an adjacent window to find three males aged between 18 and 20 wearing bandanas across their faces.

"These bloody dickheads they walk around with these red scarves thinking they're tough. One of them said 'Give us whatever you've got. Money or alcohol.' I told them to piss off," Whaitiri said.

"Then [one of them] started swearing and came rushing at the window to climb in. So I whacked him across the head," he said.

Whaitiri said he gave the man a decent hit with his baseball bat.

"Then they all started shouting and swearing at me. They threw something through the [ranchslider] window, then they smashed the two kitchen windows," he said

The former despatch manager and rubbish collector, who has lived in the flat for nine years, lifts weights every day in the living room of the small flat.

"There's a lot of young ones around here that I get on with. But not these dickheads with the scarves on their faces. I'm not scared of them. I just can't be bothered with them," he said.

A witness reported that around that time they saw a Blue Honda Civic parked outside the Takapu Rd address with about five males inside.

Detective Glen Yule said Whaitiri, who turned 79 in July, hit the assailant quite hard "so we would like to hear from anyone who might know of a young man who came home with a large bump, or bleeding on his head".

Yule praised Whaitiri for doing the right thing by looking out the window rather than opening the door, and said if he had opened the door he would have been seriously assaulted.

Any information regarding such activities can be reported to police on 06 831 0700, or information can be left anonymously on Crimestoppers by calling 0800 555 111.
Posted by Anthony at 6:53 PM No comments: