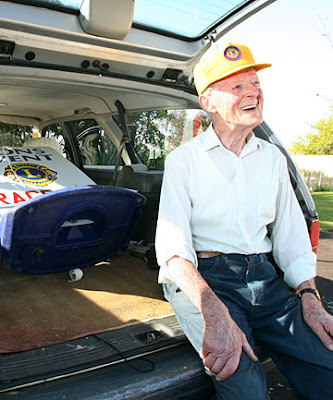 DONNA WALSH/Waikato Times
QUICK THINKING: Lions Club member John Milne, 78, sits on the car a thief had tried to steal with him in it.

Cambridge's John Milne knew immediately what he had to do when confronted by a man trying to steal his car – jump in the back and refuse to get out.

Now nicknamed "Rambo" by his mates, the plucky 78-year-old former undertaker made the decision to jump in the back of his station wagon as it was being driven away by the thief.

The man and an associate had met Mr Milne at the Lions Clubrooms about 7.30pm last Friday – giving a story that they wanted to look at furniture being sold in a garage sale – when the man suddenly grabbed his keys and got into his car.

"All I thought was `I can't let the bastard get away with the car'," Mr Milne told the Times in his northern Scottish accent.

So Mr Milne jumped in the back and held on tightly as the thief took off at high speed down Vogel St.

"The seats were down and I was yelling for him to pull up.

"He was all over the bloody road."

There was a big glass lamp in the back of the car, so Mr Milne threatened the thief with it.

After being driven around Cambridge for several minutes, Mr Milne managed to persuade the man to return to the clubrooms. But Mr Milne, armed with two shards of glass from the smashed lamp, still refused to get out of the boot.

"He said `put down your weapons'.

"Then he asked if I had anything he could wipe off his fingerprints with, so I gave him my hankie."

The young man eventually left, but didn't give the keys back. So Mr Milne sat in the car for 30 minutes before deciding it was safe for him to get out.

Mr Milne jumped a fence and ran across the road to seek help from a friend.

"I wasn't scared at the time [the car was being stolen], but it hit me after. But I'm good as gold now."

Mr Milne said the man apologised to him before running off.

"He said `I'm so sorry. I didn't want this to happen, I don't want to hurt old people'.

"I guess if he had have been a violent man it would have been no trouble at all for him to kick my head in."

While Mr Milne was unhurt, he still wanted to see the man punished, though probably not sent to jail.

People needed to know they couldn't take off with a person's car and get away with it, he said.

Detective Sergeant Ross Patterson, of the Waipa CIB, said the incident was one of the more unusual thefts they'd had to deal with.

But he said he wouldn't recommend other victims take such action.

He said a 17-year-old man had been arrested and another man was likely to be.

Only one of the men actually got into the car. His associate had taken off on foot.
Posted by Anthony at 10:02 PM No comments: