Top wing chun man, Mike, at home with his mistress..... 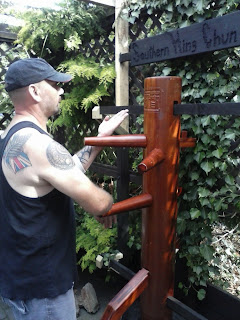 Woman fights off attacker by river

Police are praising the courage of a Nelson woman who fought off an attacker after being grabbed from behind on the Maitai Walkway.

Officers are increasing patrols in the Queen's Gardens area following the incident, the second violent attack on a woman in the area in less than a week.

In the latest incident, only about 100 metres away from the gardens, a woman in her 40s was grabbed about 10pm on Thursday. Police said the attack appeared to be sexually motivated.

The woman was walking home when she was dragged under the Normanby Bridge, where there was a violent struggle.

Acting Nelson Bays area commander Inspector Ross Lienert said she suffered bruises and scrapes, but managed to fight off her attacker and get away.

Mr Lienert said the woman showed "real courage", punching the offender to break free. He could have visible injuries as a result.

"There could be bruising around his face.

"She has been subjected to a number of punches, but she's managed to land a few of her own and escape from the attacker. She's done extremely well under the circumstances. It is apparent from the description of the incident that the attack was sexually motivated," he said.

The offender was described as Caucasian, about 170cm (5ft 7in) tall. He was of medium build, with short hair, and was thought to be in his 20s. He was wearing dark blue baggy jeans which had a tear on the seat, and a grey, long-sleeved hoodie with a zip up the front.

The hood was up, and had a light-coloured lining and a small tear. There was dark writing on the front of the hoodie.

Police would like to hear from anyone who was in the area at the time, and anyone who may be able to help identify the attacker.

They would also like to hear from anyone who may have experienced a similar incident but has not yet reported it to the police.

Mr Lienert said police were not ruling out the possibility that Thursday's attack was linked to last Sunday's rape, as they both involved women on their own in the same part of town. "We don't want to categorically say that there's a link, but certainly we've got to look at that option."

Police would be going door to door and speaking with residents in the area today, he said, and staff would be carrying out high-profile foot patrols.

"We want to assure people that live in that area that they are safe. Until this person is located, we will have a presence there."

Mr Lienert advised people against walking alone in the area, and said they should call police immediately if they thought they might know who the attacker was, or saw someone who fitted the description. "We want to catch this person as soon as possible."

The earlier attack happened about 1am last Sunday in Queen's Gardens, near the public toilet.
The 18-year-old victim had been at the Little Rock Bar in Bridge St, and had stopped to call a taxi. She was grabbed from behind before she could make the call.

Police said she was raped, but the offender was frightened off by the sound of people in the area.

The victim described the offender as skinny, aged 20 to 25, and Caucasian with short-cropped hair.

On New Year's Day, a 62-year-old woman was raped at the Victory Community Gardens.

Nelson fisheries worker Hilton Hone-Heke has been charged with a number of offences in relation to that rape and assault. He is in custody.

Information on either attack in the Queen's Gardens area can be given by calling Nelson police, ph 546 3840, or anonymously through Crimestoppers, 0800 555 111.

Posted by Anthony at 8:02 AM No comments: