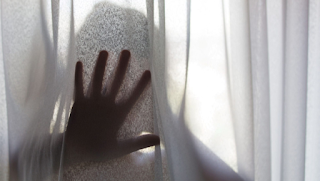 A 24-year-old woman in southern India has cut off the genitals of a Hindu holy man who tried to rape her and who she alleged has been sexually assaulting her for the past eight years, police say.

G. Sparjan Kumar, a police officer in Thiruvananthapuram, the Kerala state capital, said the woman fled her home after the incident on Friday night [Saturday NZ Time] and called police.

The alleged attacker, 54-year-old Gangeshananda Theerthapada, who claims to be a spiritual healer, was reported to be in stable condition after reconstructive surgery.

Pinarayi Vijayan, the state's chief minister, said it was brave of the woman to take such action.

"It's a courageous and strong act by the woman," he said.

The New Delhi Television news channel said the woman's family knew Theerthapada, who used to visit their home to cure her bed-ridden father. She told police that he would rape her whenever he got an opportunity.

When he again visited her home on Friday night and tried to force himself on her, she got hold of a knife and attacked him, Kumar said.

Violent crimes against women have been on the rise in India despite tough laws enacted by the government.

http://www.stuff.co.nz/world/asia/92809173/indian-woman-cuts-off-alleged-rapists-genitals-in-courageous-act
Posted by Anthony at 8:25 PM No comments: 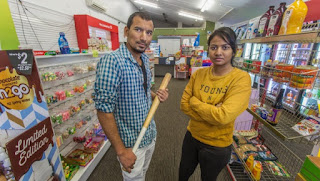 Sujan Burra was robbed the day he took ownership of his Christchurch dairy.

The Woolston Discounter, on Ferry Rd, has been held up almost every month since.

After a knife-wielding robber in a skull mask stole cash earlier this month, Burra put a baseball bat under the counter and a lock on a gate at the end of the counter.

So when two offenders came in on Saturday night - the sixth robbery since September - he was prepared.

It started with a man wandering around the store and asking about the price of products about 7.20pm.

He "seemed like a regular customer", Burra said, until a second person, disguised in a dark sweatshirt, hat and mask, walked in.

The man tried to barge through the gate, which separates employees from the store. The lock kept him out.

Burra grabbed the bat. He swung it at the masked man.

Both men took off on bicycles with a handful of snacks.

The Discounter is about 200 metres from the Woolston Night 'n Day, which has been held-up nine times in eight months. That dairy set up a "safe room" at the back of the store, where attendants can lock themselves inside and call for help.

In Auckland, fed-up dairy owners marched on Sunday, calling on the Government for harsher penalties for thieves after a string of robberies left many scared to return to their stores.

Burra was stumped on how to stop thieves targeting the stores. Usually, they went after cash from the till or cigarettes.

"We can't close the business at 6pm, maybe there needs to be another CCTV camera installed outside to watch where they go. By the time the police arrive five minutes later, they're gone."

"We're an easy target, there's usually only one man on the till."

Though Saturday's incident was no great monetary loss, each theft made it harder to keep the business open, Burra said.

"All violent offences are taken seriously and investigated thoroughly to determine whether there may be any emerging patterns."

Anyone who found themselves in a robbery should comply with the offender's demands, Sweeney said.

"The risks just aren't worth it."

A police spokeswoman said an investigation into the Saturday night robbery was under way.

http://www.stuff.co.nz/national/crime/92060698/christchurch-dairy-attendant-swings-bat-at-robbers
Posted by Anthony at 5:43 PM No comments: