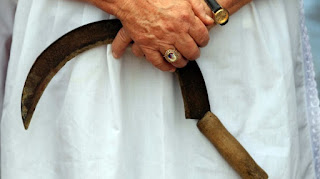 After days of being abused, the woman struck out at her brother-in-law with a sickle.
(Laszlo Balogh/Reuters)


A woman in central India showed up at a police station after slicing off her brother-in-law's genitals, telling police he had sexually abused her for days.

The 32-year-old woman, who walked into the station with her three children, said it was the only way for him to be stopped, reported the Times of India.

Police from the Sidhi district of Madhya Pradesh rushed to call for medical aid for the injured man, but he had taken his own life before help arrived.

The woman had been living with her brother-in-law as her husband was working more than 1100km away in another city.

After days of being assaulted by her brother-in-law, the woman planned her self defence by striking at him with a sickle, reported the Times of India.

She believed the severed organ would be a key piece of evidence in her rape case.

Police said she was mentally stable and had no regrets over what she had done.

According to the Times of India, the woman has been charged with attempted murder.

"This is a rare case and has to be investigated for a proper charge sheet," said Sidhi police spokesman Abid Khan.
Posted by Anthony at 9:44 AM No comments: