An Australian service station owner has exacted sweet revenge on a would-be robber armed with a machete, 7 News reports. 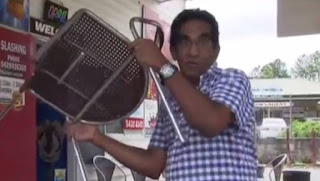 Ratan Raju, whose service station is outside the town of Caboolture in rural Queensland, grabbed the nearest thing to hand to protect himself when he was confronted by the armed man: a lolly tin.

CCTV footage shows the man approaching Raju, waving his machete around and demanding cash. Raju grabs a large tin of Milkos from behind the counter and hurls it at his assailant's head, sending him running for the door.

Raju then follows the would-be robber outside, arming himself with a tube of Pringles and a pot of honey on the way.

"I whacked him on his head and then he ran further so I ran closer to the garbage bin and I gave it to him on his back," Raju told 7 News.

It's not the first time the Australian Navy veteran has taken on a robber: the last person whe demanded cash from his till got knocked out cold.

During the latest drama, Raju's wife and children were in the room behind the store.

"I work 14 hours a day, seven days a week, no one is just going to come in and grab my sweat and my blood off me," he said.

And if the robber returns? Raju has a clear message: "He'll be sleeping on that ground, I swear."

https://www.stuff.co.nz/world/australia/99253914/australian-gas-station-owner-fights-off-armed-robber-with-lollies-pringles
Posted by Anthony at 9:09 PM No comments:

An off-duty Brazilian police officer had a baby under one arm when he pulled his gun and engaged in a shoot out with two robbers, leaving the raiders dead.

The gun battle took place in a pharmacy and part of it was captured on surveillance footage. 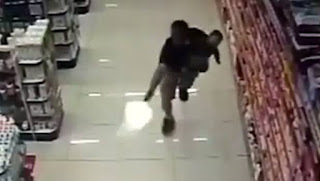 Souza opened fire when one of the robbers, wearing
a masked hoodie, pointed a gun at him.

At one point the officer is seen handing the baby to his wife, who had taken cover behind one of the store's aisles.

Brazilian newspaper Estadao reported Sao Paulo police sergeant Rafael Souza, his wife and the infant, were shopping in the city of Campo Limpo Paulista on Saturday.

Two men stormed the shop and announced they were robbing the place.

One of the robbers, wearing a masked hoodie pointed a gun at Souza. At that point Souza pulled his gun and the shootout started.

Souza told investigators he fired first because he believed the robbers would have opened fire if he told them he was a police officer.

Posted by Anthony at 8:28 PM No comments: 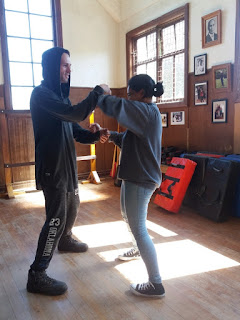 The greatest fist-fighter who ever lived 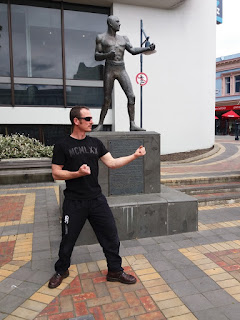